The death of George Floyd in Minneapolis in May 2020 sparked a resurgence of the Black Lives Matter movement, injecting new energy into the conversation. Perhaps the biggest shift in attitude has been that it is not enough to not be racist. We must be actively anti racist. Our silence is an act of compliance with the problem.

This article outlines 7 ways (divided into two blogs) to incorporate anti-racist habits into our everyday lives.

Change can start by looking critically at the things you already do on an everyday basis and ask: what can I do right here and now? The problem is always closer to home than we would like to believe.

And most importantly change can start by recognising that, despite all our good intentions, we might actually be a part of the problem. Acknowledging our own racial biases is an important step in beginning to undo them.

For clarity and emphasis I have underlined key terminology that might require further reading. These are words that are important we incorporate into our everyday vocabularies.

To understand WHY we need this kind of anti-racist action in the first place, we need to understand the problem. And it’s clear our school curriculum was more than happy to teach us which of Henry VIII’s wives were beheaded, but when it came to teaching us about the slave trade, civil rights movement or the history of colonialism…not so much.

But that’s no excuse. It is no ones responsibility (and definitely not your BIPOC friends) to teach you about race.

Take responsibility for your own learning.

That especially means getting up to date on your vocabularies because sticking in a “…or whatever we’re meant to call it these days..” is not an excuse. Political correctness gets a lot of backlash for being the product of an oversensitive generation of liberal snowflakes. But language is one of the most powerful tools of oppression and there’s a reason that white people aren’t saying the “n word” in 2020. It’s not up to you to decide what you think the correct term is unless you are yourself a part of that minority group. And if you don’t know what that is, get on google!

Make this learning a part of your day to day life. Whether that means sticking on a podcast on while you run / drive / walk / do the housework, watching a film about race next time you’re having a takeout, or suggesting a book by a black author to your book club, make it a habit.

I have compiled some resources to get you started.

If you want more please take a look at this google document.

2. Support Black and Minority Owned Businesses
Where we shop, and who we give our money to, is largely governed by habit. But the habits we form are influenced by our assumptions and unchecked biases we carry towards marginalised people and groups. Acknowledging our unconscious prejudices and then acting against them is SO much more useful than denying that they exist in the first place.

Questioning where we choose to put our money is a great place to start. Ask yourself:

What independent and minority-owned grocers are available in my local area? In the event that there aren’t any black or minority owned businesses in your area: that’s a problem. We can’t just shrug this off. There are evidently enormous social, economic and political barriers preventing BIPOC people from establishing successful businesses locally. How can we promote these businesses using our own platform or network?

Go out of your way to travel those 5 extra minutes! Put in time to research where to find these shops.

On suggesting a similar initiative to my brother earlier this month, his reply was, “well isn’t it just racist towards white people to favour black owned businesses based purely on the colour of their skin. Why can’t we just see people as people?” We currently live in a society that disproportionally favours and protects white people. If you are a white person or business owner, it is important to acknowledge that no matter how hard you have worked to get where you are, others facing structural discrimination have had to work harder.
White privilege doesn’t mean that you haven’t faced hardship in your life, but that the colour of your skin isn’t something that makes it harder.

Equality and treating everyone equally (as my brother proposed) only works if everyone is starting from the same place, but we know this is not the case. Right now what we need is equity. Equity is about treating people differently based on who has the most urgent need right now. This cartoon sums up this point: 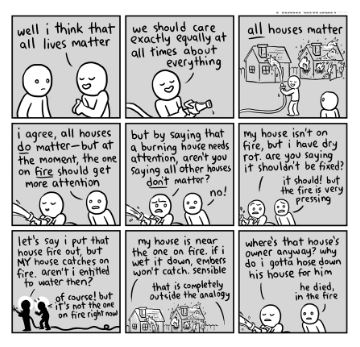 3. Have Conversations About Race

It’s not racist to talk about race.

In fact it’s vital that we make it an everyday topic of conversation and normalise challenging each other’s internalised prejudices. When a friend, family member or colleague corrects our out-of date-terminology or flags an inappropriate comment, learn to see this not as an attack but as an act of care. It is a positive thing that you are surrounded by people who are invested in social change.

If you find yourself staying silent during these conversations, perhaps out of fear of saying the wrong thing, this is a clear indication that you haven’t done your homework. If you know you don’t have the vocabulary or understanding to hold an extended conversation about race, don’t wait for anyone to teach you- it is your own responsibility to get yourself to a place where you can. So go back to step 1 and read up!

Don’t shy away from these conversations because you think as a white person, racism isn’t your fight. The truth is that we’re all fighting for something, whether it’s gender equality, LGBTQ+ issues, disability rights, black lives etc. What’s important to recognise is that we can’t liberate one group without liberating them all, so if your activism isn’t intersectional it’s missing the point. That doesn’t mean you have to take the front seat of every social justice war there ever existed, but it means recognising that our fights are interconnected and therefore as a white person, racism is absolutely your problem.

If you’re having frequent conversations about race you will get things wrong. And that’s ok.  Be willing to make mistakes and prepared to take responsibility when you do. When someone corrects you, put your ego aside and say “thank you for letting me know”. This is how we learn. 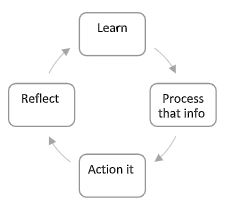 Please feel free to send any questions, comments or critique by email.